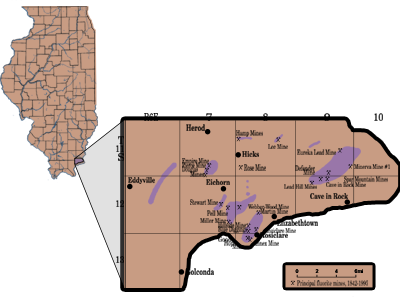 "Battery Rock, two miles below, in Illinois, is a high, rocky bluff, extending for some miles along the river, giving a highly picturesque appearance to the scenery." 1848 Conclin's New River Guide

An unincorporated community north of Cave-in-Rock

"A township and small village in the southern part of Hardin county on the Ohio river." 1864 Gazetteer

"Cave-in-Rock, twelve miles below, is a much celebrated place, and viewd with interest by all travelers on this river. It was the rendezvous, about the year 1801, of a celebrated outlaw, by the name of Mason, and his comrades, who subsisted by plundering the flatboats and arks, which descended the river with produce, or waylaying the traders, on their return from New Orleans, with the produce of their sales - robbing and murdering them. They continued their nefarious business for several years, until their depredations became so alarming, that the Governor of Mississippi offered a reward of five hundred dollars for Mason's head. Mason was shot, and his head carried to Washington, then the capital of Mississippi, by one of his own band, named Harpe, a notorious outlaw, who had escaped from Kentucky. The following descritpion of the cave is given by a visitor to it:

"Perhaps one of the most beautiful panoramic views which the traveler meets in our extensive country, is afforded by the bold, rocky bluffs, with the intervening valleys, which meet the eye, as one descends the stream. Cedars cover the high woodlands above and below the cave, and civilization, which has extened its rude hand over all surrounding country, has left this romantic spot untouched. The entrance to the cave is nearly semi-circular; and when the river is high, it is on a level with the water. The passage, which is twenty feet high, affords admission into a spacious square apartment, whose dimensions may be fairly stated at about one hundred and twenty-five feet. Above the room is a magnificent chamber, whose natural limestone formations greatly resemble the carvings of a Gothic cathedral. The entrance to this beautiful room is by a chimney, so to speak, in the roof of the first. An opening at one end of the cave leads into a deep vault, extending far into the heart of the rock, and the traveler may amuse himself, by counting the many seconds which elapse, between the time when a stone is cast into the abyss, and the return of its reverberations." 1848 Conclin's New River Guide

"A post village of Hardin county, on the Ohio river, about 400 miles below Cincinnati. Commodore D. Miller, Postmaster."1858 Gazetteer

An unincorporated community near the Ohio River in eastern Hardin County

"Is situtaed in the south part of the state, bordering on Kentucky, and is one of the smallest counties in the state, having an area of only 260 square miles; the Ohio river forms the southern boundary, the soil is productive. Corn, oats, cattle and swine, are the staples; it contains some 15 or 20 churches, and has over 800 pupils attending public schools; the Cave-in-rock well known to navigators on the Ohio river, is situated in this county. Hardin once formed a part of Pope county. Capital, Eliabethtown. Population, about 4,000." 1858 Gazetteer

An unincorporated community north of Rosiclare and Elizabethtown

An unincorporated community at the intersection of Routes 34 and 146, west of Elizabethtown 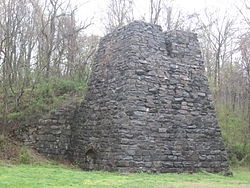 An unincorporated community northeast of Cave-in-Rock

Located in Cave in Rock Township

An unincorporated community located at the intersection of Routes 1 and 146, north of Cave-in-Rock

Located in McFarlan Township vs near Karbers Ridge

"A post village of Hardin county, near the eastern part, 5 miles from the Ohio river. Edward Shaw, Postmaster." 1858 Gazetteer

An unincorporated community on Route 146 northeast of Elizabethtown

"A township and small post village in the southern part of Hardni county, on the Ohio River." 1864 Gazetteer

"A post village of Hardin county, about one mile from the Ohio river and 22 miles southwest from Shawneetown. Timothy Pell, Postmaster." 1858 Gazetteer

An unincorporated community west of Rosiclare

An unincorporated community located in Monroe Township, north of Elizabethtown

"A small post office of Monroe township, Hardin county, seven miles due west of the mouth of the Saline River." 1864 Gazetteer