1912 A History of Southern Illinois

A History of Southern Illinois consists of four volumes, written by George W. Smith and published in 1912.

Hardin county was made by taking the south end of Gallatin and the northeast part of Pope. It was created March 2, 1839. Putnam county has the reputation of having the smallest area of any county in the state 173 square miles but Hardin comes in for second honors with 185 square miles. However, Hardin stands last in population, with 7,015, while Putnam ranks next with 7,561.

This county though small in area is a very interesting county. It is picturesque in its physical aspects. It lies in the eastern terminus of Ozark range, which crosses Southern Illinois. It has long been held up to ridicule as not having any railroad, but this can be no longer truthfully said of Hardin county, for she has both a steam road and an electric line.

The chief interests in Hardin county are agricultural and mining. To be sure the farms are small, but they are well improved and the farmers are a thrifty, intelligent class. More than half of the farms are occupied and managed by their owners. Out of 927 farmers 905 of them are native born whites.

In 1910 the census showed an average of corn to the acre of 29 bushels, and an average of 19 bushels of oats per acre, and of wheat 14 bushels. Three hundred eighty-two acres were in potatoes, which yielded 18,566 bushels. The farmers have 666 acres in alfalfa, which is a new crop, and the prospects are for a good yield.

In 1839 lead was discovered on the farm of Mr. James Anderson, one mile below the site of the present town of Rosiclare. Nothing was done at that time toward developing the deposit. In 1842 a Mr. Pell, living one mile north of Rosiclare, discovered spar and lead. Companies were organized and mines opened. The operations were poorly prosecuted. These mines were worked at intervals till 1851 when they were abandoned. Nothing was done until recent years when the fluor spar mines were opened up, and since then there has been great activity in the fluor spar, zinc, and lead business. The mines are about a mile back of the town of Rosiclare. From the mines there are two roads, one steam and the other electric, leading to the river. These are used to transport the products of the mines to the river, where they are loaded usually on barges for transportation to the markets. 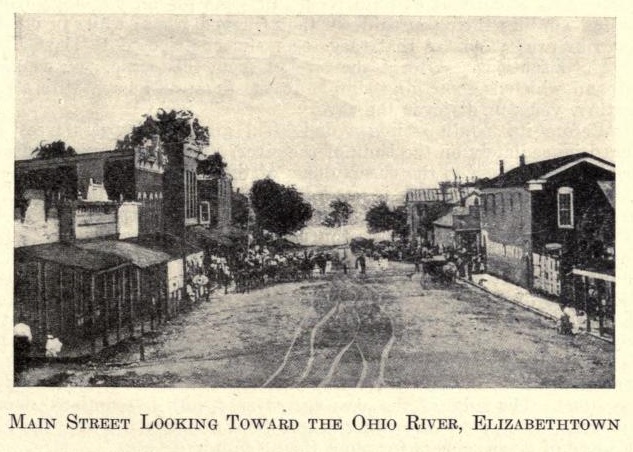 The first settler within the limits of the county probably was James McFarlan, Sr., who had a contract with the United States to furnish beef for the garrison at Fort Massac. He settled at the present site of Elizabethtown in 1808, where the trail crossed from Nashville, Tennessee, to the salt works at Equality. Here McFarlan ran a ferry across the Ohio for twenty years. William McFarlan was also a settler as early as 1808. Benona Lee came in 1809. In 1808 Gov. Wm. H. Harrison gave permission to Isaac White and Jonathan Taylor to operate a ferry at Elizabethtown.

John King was the first cabinet maker. A Mr. Ewell was the first teacher and the Rev. Mr. Stilly, a Baptist minister, preached the first sermon in the county.

Without doubt the most noted natural object in the county is Cave-in-Rock, which is a remarkable cavern some seven miles above Elizabethtown on the Ohio. Probably we could not do better than to quote from a noted English traveler who visited it in 1803. The traveler was Thaddeus M. Harris, who says: “For about three or four miles before you come to this place, you are presented with a scene truly romantic. On the Illinois side of the river, you see large ponderous rocks piled one upon another, of different colors, shapes, and sizes. Some appear to have gone through the hands of a skillful artist; some represent the ruins of an ancient edifice; others thrown promiscuously in and out of the river, as if nature intended to show us with what ease she could handle those mountains of solid rock. In some places, you see purling streams winding their course down their rugged front; while in others, the rocks project so far that they seem almost disposed to leave their doubtful situations. After a short relief from this scene, you come to a second which is something similar to the first; and here, with strict scrutiny, you can discover the cave.

"Before its mouth stands a delightful grove of cypress trees arranged immediately on the bank of the river. They have a fine appearance and add much to the cheerfulness of the place.

“The mouth of the cave is but a few feet above the ordinary level of the river, and is formed by a semicircular arch of about 80 feet at its base, and 25 feet in height, the top projecting considerably over, forming a regular concave. Prom the entrance to the extremity, which is about 180 feet, it has a regular and gradual ascent. On either side is a solid bench of rock, the arch coming to a point about the middle of the cave, where you discover an opening sufficiently large to receive the body of a man, through which comes a small stream of fine water, made use of by those who visit this place. From this hole a second cave is discovered whose dimensions, form, etc., are not known. The rock is lime stone. The sides of the cave are covered with inscriptions, names of persons, dates, etc. According to tradition, this cave has been the hiding place of river robbers for more than a hundred years."