A number of Hardin County men and boys joined the Union Army (and probably the Confederate Army as well). Not all joined Illinois units. Some joined Kentucky units, particularly the 48th Kentucky Infantry.

At least one Hardin County veteran earned the Congressional Medal of Honor. Riverboat Pilot John H. Ferrell entered the U.S. Navy in Illinois. Born: 15 April 1823, Tennessee. G.O. No.: 59, 22 June 1865. Citation: Served on board the U.S. Monitor Neosho during the engagement with enemy batteries at Bells Mills, Cumberland River, near Nashville, Tenn., 6 December 1864. Carrying out his duties courageously during the engagement, Ferrell gallantly left the pilothouse after the flag and signal staffs of that vessel had been shot away and, taking the flag which was drooping over the wheelhouse, make it fast to the stump of the highest mast remaining although the ship was still under a heavy fire from the enemy.

Search by place of residence: Hardin County in general, or Cave-in-Rock, Elizabethtown or Roseclare by particular. Also, search by individual at the Civil War Veterans Database at the Illinois State Archives. The state also maintains a separate database for Illinois Civil War Veterans serving in the U.S. Navy. 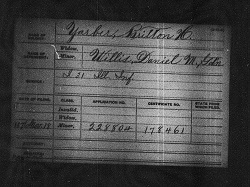 "Daniel Willis assumed legal guardianship of my Grandfather, William Burl Yarber, and filed a motion in court to collect Britton's pension on behalf of William. He won the case and Amanda Clark (William's mother) and myg-grandmother, had to pay him."