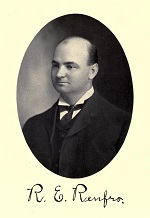 ROBERT EAGLE RENFRO. The rapid progress and development of Southern Illinois has made the real estate trade active and extensive for many years, given the loan business great opportunities and kept the fire insurance companies in very active and profitable operation. These conditions have also furnished many men with business and employment, and been, as they always are, of great benefit and service to the region in which they have obtained.

One of the most energetic, enterprising and successful men engaged in the triple business specified, in Carbondale is Robert E. Renfro, who has been occupied in these lines of endeavor since 1893, and in the course of his activity in them has been of great service in stimulating the growth and development of all Southern Illinois, throughout which his operations have been conducted in a manner very creditable and profitable to him and satisfactory to all with whom he has had dealings. Mr. Renfro was born in Elizabethtown, Hardin county, Illinois, on May 25, 1873, and is a son of the late John H. B. and Emeretta Leona (McClellan) Renfro, prominent citizens of that county, the story of whose lives is briefly told in this work. The father, as will be seen by reference to the sketch of him, was treasurer of Hardin county four years and county clerk there seventeen years. He was afterwards a lawyer and pension attorney until his death, in October, 1908.

His son Robert E. began his education in the public schools and complete it at the Southern Illinois Normal university, from which he was graduated in 1893. After his graduation he began his career in business in the department of real estate, loans and fire insurance. He has found the business so congenial, and has made it so profitable, that he has continued his connection with it and steadily enlarged his operations ever since. As has been stated, his dealings now extend all over Southern Illinois, and often involve transactions of considerable magnitude. He is regarded as master of his line of endeavor, and no one questions the excellence or accuracy of his judgment in reference to the value of real estate or the future possibilities of any tract under improvement.

The public affairs of his city have also deeply interested Mr. Renfro, and made him an advocate of the highest moral tone attainable in the government of the city. On a recent occasion he was the candidate of the anti-saloon party for mayor, but the hour was not ripe for the conditions he and that party advocated, and he was defeated at the election. This did not dampen his ardor for good government, however, and he has ever since kept up his demand for it and for every other form of improvement.

The nature of his business makes him energetic and effective in promoting the extension and growth of the city and the development and betterment of every locality in which he operates. But this only quickens and intensifies a disposition that exists in his very character and make-up as a man and citizen. For he is in all things essentially and practically progressive by nature. In fraternal relations he has active membership in two of the benevolent societies so numerous among men, the Order of Elks and the Knights of Pythias. In political matters he is an unwavering Republican in national contests, but has never been desirous of a political office except the local one mentioned above, and this his friends induced him to seek for the good of the city. His religious connection is with the Methodist Episcopal church, in the work of which he is very active and energetic, being a member of the official board of the congregation which has the benefit of his serviceable membership.

On Sept. 4, 1895, Mr. Renfro was joined in marriage with Miss Beulah Witt Storm, a daughter of Oliver P. and Emma H. (Haley) Storm, of Jonesboro, Illinois, where her father was a merchant at the time of his death, in 1888, and for many years prior to that. She and her husband have two children, their sons Donald McClelland and Robert Kennon, who are still bright links that bind the whole family into one of the most agreeable family circles in the city of their home, and help to make the household one of its most attractive and popular social resorts.