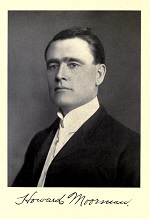 HOWARD MOORMAN, M. D. The modern physician occupies so important a position in the life of the community which is the field of his professional effort that much is required of him aside from his technical knowledge and scientific skill. In Dr. Howard Moorman, who devotes his entire time and attention to the demands of a large practice, Christopher, Illinois, has a man of professional ability and experience, and of pleasing personality, together with honorable citizenship. He comes from old pioneer families of the state, both the Moormans and the Moores having come early to Illinois. He was born in Hamilton county, Illinois, July 30, 1869, and is a son of James P. and Mary (Moore) Moorman.

The paternal grandfather, James Moorman, was a native of Ohio, where he was interested in the manufacture of coke. He came to Illinois when there were large tracts of land in Hamilton county to be secured from the Government, and here he died in old age. Among his sons was James P., who was born January 14, 1841, near Ironton, Ohio, and he was five years old when he accompanied his parents to Illinois. They settled first in Hardin county but shortly afterward moved into Hamilton county, which part of the state is yet his home, he being a successful farmer. During the Civil war he was captain of Company H, Thirteenth Illinois Cavalry, and served through three years of the war. In his early years he was a school-teacher. He still maintains his home on the old homestead farm which his father secured sixty years ago. He married Mary Moore, a daughter of Alfred Moore, who came to Illinois from Virginia in the thirties, settling in Hamilton county, where he lived until the time of his death, in 1879. He was well known all over the county and was one of the heroes of the Black Hawk war.

Howard Moorman attended the country schools until he was seventeen years of age and then secured a teacher's certificate and for thirteen years following taught school in Hamilton county. When the Spanish-American war broke out he enlisted as a private in Company D, Ninth Illinois Infantry, and served one year. At the close of his military service he entered the College of Physicians and Surgeons at St. Louis, and was graduated from that institution with his medical degree in 1906. Dr. Moorman immediately established himself at Christopher, where he found congenial surroundings and an encouraging professional field, and here he has continued and now has a practice that demands his entire time. As an intelligent and educated man he takes an interest in public matters both at home and abroad, but political office does in no way appeal to him. He has won his own way into the confidence of those among whom he has chosen his home and he stands high in their esteem and respect.

Dr. Moorman was married in 1908, to Miss Myrtle Walker, who is a daughter of J. W. Walker, a well known contractor residing at Christopher. Dr. and Mrs. Moorman are members of the Missionary Baptist church. He is identified with the Odd Fellows and the Red Men, and belongs also to the Franklin County and Illinois State Medical Societies.